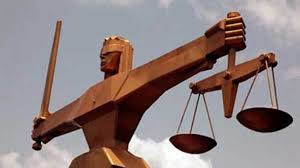 A Lagos Federal High Court have convicted and sentenced a freight forwarder, Omoniyi Ajibola Isaac, to a five year-imprisonment, for unlawful export of 27. 250 kilograms of Cannabis Sativa, also called marijuana.

Justice Ambrose Lewis-Allagoa, who presided over the court, gave the 37 years old convict, the jail terms, after he pleaded guilty to a count charge of …., made against him by the National Drug Law Enforcement Agency (NDLEA).

The convcited freight forwarder, who is a father of three, according to the prosecutor, Mr. Augustine Nwagu, was arrested with the prohibited leave, on January 11, 2022, during the examination and clearing of cargo for export at NAHCO Export Shed at Murtala Mohammed International Airport, Ikeja, Lagos.

Nwagu told the court that the offence commited by the convict, contravened Section 11(b) of the National Drug Law Enforcement Agency Act Cap N30 Laws of the Federation of Nigeria, 2004, and punishable under the same act of the law.

The convict admitted committing the offence and pleaded guilty to the charge.

Following his plea of guilty, the prosecutor urged the court to convict and sentence him in accordance with the section of the law he was charged with.

But his counsel, Dennis Warri, in allucutor, described the convict as a ‘victim of circumstances’, who was mis led by a customer.

He also told the court that his client is a first time convict, and a father of three children, who did not have previous criminal or conviction records

He therefore pleaded with the court to give his client a non-custodian sentence or an option of fine in lieu of the any jail terms the court may wants to give him.

Justice Lewis-Allagoa after hearing the allucutor made by the parties, sentenced the convict to five years imprisonment.

The Convict’s Charge Reads: “that you Omoniyi Ajibola Isaac, male, 35 years old; on or about the 11th day of January, 2022 during the examination and clearing of cargo for export at NAHCO Export Shed at Murtala Mohammed International Airport, Ikeja, Lagos, within the jurisdiction of this Honourable Court without lawful authority exported 27.250 kilogrammes of Cannabis Sativa, a narcotic drug similar to Cocaine, Heroin or LSD and thereby committed an offence contrary to and punishable under section 11(b) of the National Drug Law Enforcement Agency Act Cap N30 Laws of the Federation of Nigeria, 2004.“