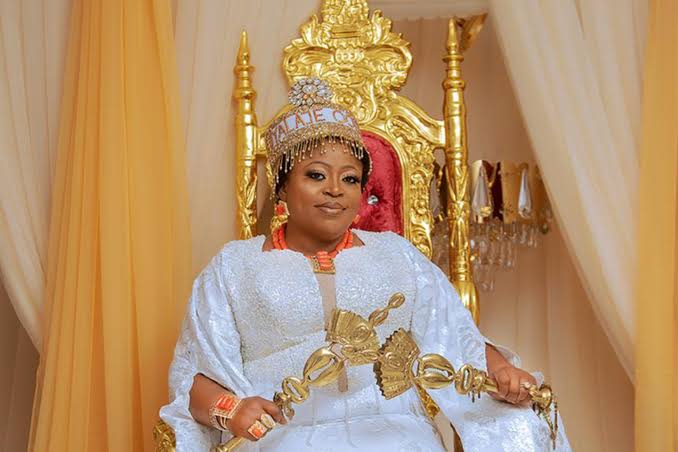 The Ooni of Ife, His Imperial Majesty Adeyeye Enitan Ogunwusi Ojaja II has showered enormous praises on cultural ambassador extra-ordinaire, Amb. Dr. Princess Toyin Kolade, the Iyalaje Oodua Worldwide. Ooni Adeyeye stated this while addressing a mammoth crowd of well-wishers on Tuesday the 6th of December, 2022 during the celebration of his 7th year anniversary of mounting the coveted stool of his forefathers.

The Arole Oduduwa affirmed that ever since being conferred with the Iyalaje Oodua title, Amb. Toyin Kolade has been so unrelenting and untiring in promoting the Yoruba cultural values both locally and internationally coupled with her vision of an overwhelming economic growth for the race.

Iyalaje Toyin Kolade, a United Nations Ambassador for Peace has been very instrumental to the success of the Ooni’s throne in addition to never leaving any stone unturned in transforming of Yorubaland to the amazement of the entire world.

She has used her God-given wealth to cater for the needs of the poor and impoverished members of the larger society. She is an outstanding custodian of the Aje Festival held annually in Ile-Ife and promoted regularly in Brazil, Cuba and other pars of the world.

In a nutshell, Amb. Dr. Princess Toyin Kolade has transformed the Iyalaje title from a locally allocated position to an enviable international tag. She is a glamorous woman whose passion for business ventures know no bounds. She is the Chairman/Chief Executive Officer of Fisolak Global Resources with interest in marine, import and export, household interiors, confectioneries, oil and gas, general merchandise etc.

Iyalaje Toyin Kolade is rated as one of the most successful business amazons in Nigeria, a devoted Christian, lovely wife of Prince Kayode Kolade and extremely caring mother of four lovely children.