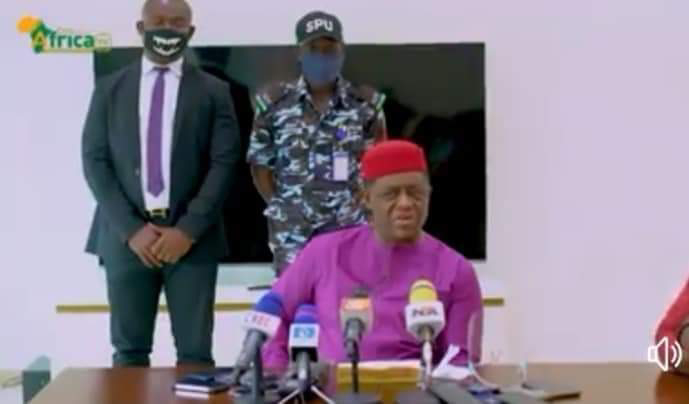 Fani-Kayode is on a tour of South South states to meet with governors and inspect their projects.

At Calabar last Thursday, he was asked by Daily Trust reporter in the state to disclose the source of the funding for the tour but the ex-minister got furious and hurled insults on the reporter.

But the group is insisting he must answer the question, adding that his outburst against the reporter had not addressed the fundamental question raised by the journalist.

In a statement signed by its Executive Director, Adewale Adeoye, the body said the reporter’s question was legitimate and that the fury with which Mr Fani-Kayode responded had further raised suspicion on who actually was funding his trip to the states.

According to JODER, Fani-Kayode’s attitude was not only an attack on the the Daily Trust reporter, but a savage onslaught on the Nigerian media and a most irresponsible attack on free speech.

“How much? Who pays the bills? The legitimate questions remain.

“Neither fury, anger nor threats can envelop this legitimate demand,” JODER said.

The group said Mr Fani-Kayode, who is known for employing the most vicious language on any government that he is not involved, had shown “an inglorious trait of intolerance, nasty instinct, a spiteful culture and a shameful, revolting attitude to a request for transparency in an issue that involves public order.”

“It is important for Nigerians to know who was funding the trips of Mr Fani Kayode.

“In any democratic country, the reporter’s question was legitimate.

“It is the right of Nigerians to know if the trips were being funded from the public purse, whether the funds being expended were drawn from the sweat of the people in those states,” JODER stated.

The group said the verbal violence of Fani-Kayode in response to the reporter’s question was a conscious attempt to divert public attention from the main issue of who funds his trip and if he had collected funds from those states he has been visiting and how much he had collected.

“The former Minister does not run a charity.

“He is not the official image maker of the State Governors he has been visiting.

“He is not the Chief Press Secretary of those states.

“Nigerians are anxious to know what purpose his visits were designed to address and at what cost,” JODER said.